A large environmental taskforce was deployed to participate in hand-treating yellow crazy ant infestations along creek systems through Cairns southern suburbs of Edmonton and Bentley Park, and into the adjacent foothills of the Wet Tropics World Heritage Area.

The treatment of the creek systems involved broadcasting granules of ant bait. This was part of a concerted effort, this month, in the ongoing battle against the invasive ants. Aerial treatments commenced in the week beginning 24 July while ground crews are continuing to treat in all affected residential areas.

Around 50 personnel shared their resources and expertise while they broadened their understanding of the yellow crazy ant threat and contributing to its eradication.

Travis Sydes who coordinates natural asset management for the FNQROC said “FNQROC and member councils are deeply concerned by the wide-ranging impacts of yellow crazy ant to the regions biodiversity, economy and communities if the outcome of regional eradication is not realised.

“It’s great to see the taskforce evolve and grow each year to include a wider range of stakeholders; it really highlights the importance of regional partnerships in the delivery the project.

“On top of great outcomes on the ground taskforces are really important skill building exercises for regional staff. The result is more eyes out there on the ground right across the Far North which is an essential part of the regional effort,” Mr Sydes said.

The western boundary of the infestation was first determined by the taskforce in 2014, followed by the first round of aerial baiting. The subsequent assessments in 2015 and 2016 showed a significant reduction in ant population density with minor expansion of the infestation area.

“It is a huge undertaking to rid our landscape of these extremely aggressive pests. Collaborating to deliver large scale works in a short space of time allows significant progress to be made that would otherwise not be possible.

“With so many organisations and private landholders committed to eradicating yellow crazy ants in our region, along with the coordinated efforts of the Taskforce, we are anticipating a positive outcome from our baiting efforts,” Ms Karger added.

Another round of treatment is expected to also take place during October this year.

Treatment is highly dependent on weather conditions and wet conditions will cause treatment to be delayed.

Suspected yellow crazy ant sightings can be reported by contacting Biosecurity Queensland on 13 25 23.

Approximately 50 staff from their respective organisations were on site equipped with yellow crazy ant treatment tools and pesticide.

Samples of yellow crazy ants were available for inspection and photo/camera opportunities.

The sites enabled shots of the operations base, cane farms and the taskforce with a rainforest backdrop.

Yellow crazy ants are among the most invasive species found in the Wet Tropics. The exotic pest has invaded around 800 hectares of land in the region, including over 200 hectares of rainforest in and adjacent to the World Heritage Area. Rather than bite or sting, the ants spray formic acid to kill their prey, making them a danger to threatened endemic species in the Wet Tropics. The 5mm ants can kill much larger prey and often work in large numbers.Yellow crazy ant taskforce go to battle 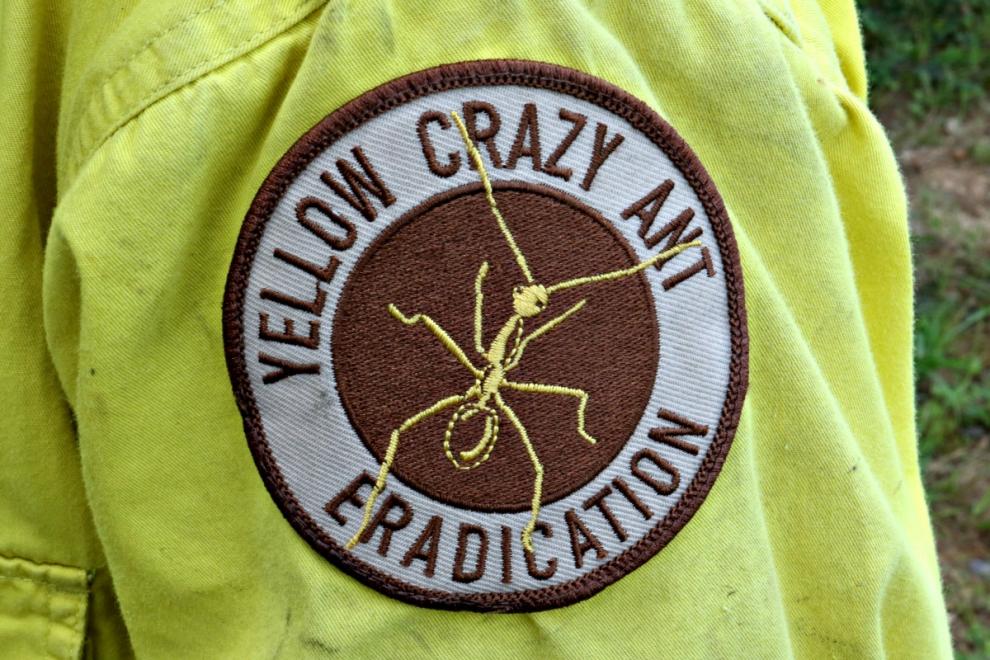