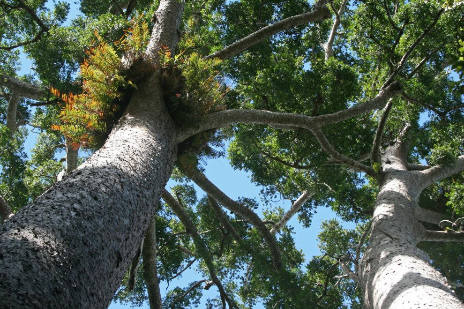 In the stages of plant evolution, the cycads and conifers were more advanced than the ferns but not as advanced as the flowering plants which would follow at the end of the Jurassic period. Conifers appeared first in the fossil record around 280 million years ago followed by the cycads 40 million years later.

The reproductive processes for these two groups are similar and both groups are referred to as gymnosperms. They have separate male and female plants and the pollen from the male cone is transported by wind to the ovules of the female cone. There are no true flowers. The seeds of these plants often bear 'wings' to help them disperse using the wind. However, some of the cycads and conifers bear seeds with a seed coat and surrounding layer of flesh like those of the flowering plants.

The Wet Tropics is home to 14 conifer species including the biggest - the Bull Kauri (Agathis microstachya). Two of these giants are 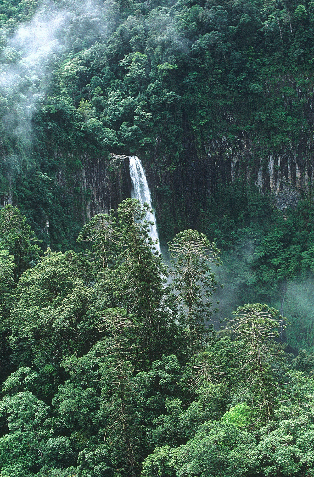 located next to Lake Barrine on the Atherton Tablelands - the twin kauris reach 41.5 metres and 44.2 metres and their trunks' girth measures almost six metres.

Another member of the interesting and distinctive group known as the 'southern conifers' is the bunya pine with its sharp, stiff leaves. The bunya pine (Araucaria bidwillii) produces a massive cone up to 10 kg in weight which is made up of fleshy seeds pieced together. These cones were an important food resource for Aboriginal people. The tree itself reaches 40 metres, although most of the bunyas seen in the Wet Tropics area are much smaller. The biggest bunyas were logged many years ago.

Another group of primitive conifers are the Plum Pines (Podocarps). These produce a seed covered in red or purple flesh, like a plum. One Wet Tropics endemic species is Prumnopitys ladei and this plum pine is confined to Mount Lewis and Mount Spurgeon (part of the Carbine Tablelands). The distribution of these pines is very sparse as the plum pines were out-competed by the more developed flowering plants.