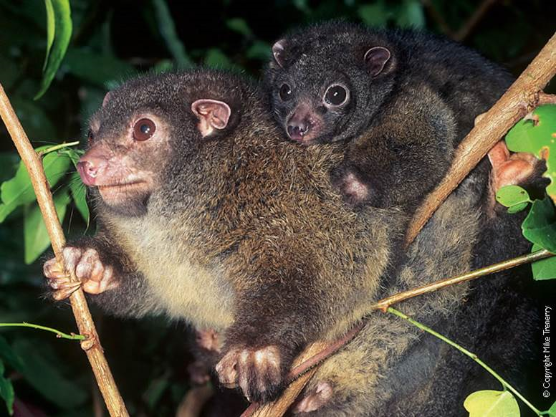 The Wet Tropics region supports the highest possum and glider diversity in Australia. This diversity is even more extraordinary when you consider that five of the possums and gliders are endemic (found nowhere else). All of them except one - the mahogany glider - are rainforest specialists.

The rainforest endemic possums are:

These endemic rainforest species are restricted to the uplands and, as a consequence, they occur as a number of isolated populations. One example is the lemuroid ringtail possum which occurs only above 550 metres on the Atherton Tableland and in a smaller population on the Carbine Tableland. The Carbine population of the lemuroid ringtail occurs only above 1,000 metres and is characterised by many more white furred individuals. See climate change responses for information about surveys on the Mount Lewis population.

Other possums and gliders

Other possums and gliders that can be found in the Wet Tropics include:

The endangered mahogany glider (Petaurus gracilis) was first recorded as a distinct species by Europeans in 1883. However, from

then until 1989 it was not distinguished in the scientific record from the squirrel glider. During the 1950s local residents at Cardwell referred to them as sugar gliders. After this rediscovery in 1989 as a distinct species, the mahogany glider was declared ‘endangered’. This glider is not rainforest dependent and prefers low woodland on swampy coastal plains, beach ridges and melaleuca swamps. It eats nectar, tree sap, tree gum, lichens and invertebrates. This glider has been the subject of a government program to buy back critical habitat for the species - land clearing is the greatest threat to the glider's survival and most of its range falls outside the protective status of the World Heritage Area.


The green ringtail possum is named for the strange illusion of colour provided by the black, yellow and white banding on each hair of its thick fur. It is easy to recognise during spotlighting as it has white patches below its ears and eyes. This possum's diet consists almost entirely of low protein, high fibre leaves, especially those of fig trees, and it will also eat ripe figs. The green ringtail is the most solitary of the possums and does not have a den. It sleeps on branches by curling itself forward so that it resembles a large furry ball. This lack of a den may also explain why its single young clings to its mother's back longer than any other possum. Predators of this quiet and sedate possum include the rufous owl, the spotted-tailed quoll and the amethystine python. Green ringtail possums may be threatened by climate change because they do not cope well with sustained temperature increases on

hot days and can die from overheating.

The emblem of the Queensland Parks and Wildlife Service is an attractive black and white ringtail possum from upland and highland altitudes. The Herbert River Ringtail is also known affectionately as Herbie. This ringtail likes leaves with a very high protein content, unlike the green ringtail. Their den is usually in a tree hollow or in large epiphytic ferns. Two young are produced and, after nearly four months, they are ready to leave the pouch. The brown juveniles only require another two weeks being carried on their mother's back before they are ready to strike out on their own.

You can read lots more details about possums in the Wet Tropics in: