At the end of the Jurassic period, plants passed another evolutionary milestone with the emergence of the flowering plants in the fossil record. These were the precursors to the modern plants with their more advanced pollination mechanisms. Starting from West Gondwana in what is now western Africa and eastern South America, the flowering plants (called angiosperms) spread across the supercontinent just as it was beginning to break apart at the beginning of the Cretaceous period. At one stage, it was thought that the angiosperms might have originated in northern Queensland because of the large number of primitive angiosperms we have today, but the fossil record has shown otherwise.

A phylogenetic reassessment of the World’s flora (using molecular sequencing) has categorised 28 near-basal (or ‘primitive’) lineages of flowering plants. The Wet Tropics can claim 16 of these near-basal families, all of which are found in rainforest habitats. These 16 families contain 46 genera and 175 species. (see the table below). The rainforests of the Wet Tropics support a great number of families which can be described as originating from lineages that branched near the base of the angiosperm family tree. These families, genera and species encapsulate, in a genetic sense, a great deal of evolutionary history. This is indicative of a long history of continually surviving rainforests in the Wet Tropics, made possible by climatic conditions and the presence of cool, moist mountainous refugia where many plants survived drier times.

You can read details of the ancient lineages of flowering plants in A Re-evaluation of Queensland's Wet Tropics based on Primitive Plants.

To spark your interest, here are just a few primitive flowering plants. See also the story about the Green Dinosaur. 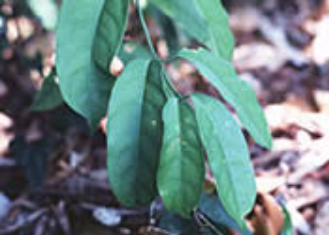 A primitive vine, Austrobaileya is rare and endemic to the Wet Tropics (found nowhere else). It is the only species in its family and it is confined to very wet rainforests from low to upland altitudes. Austrobaileya scandens is a canopy liane which climbs about 15 metres tall. Its leaves are an odd bluey-green colour but its flowers give away that it is one of the earlier representatives of flowering plants. Its flower parts are arranged in a spiral and the petals are a pale green colour. Flies are the only pollinator and to ensure they are attracted, the flowers smell like rotting fish! Apricot coloured fruits of an oblong shape, up to 70mm by 50mm hang from the vine and contain a packed cluster of chestnut shaped seeds.

Many rainforest plants have a great need to ensure they are not self-pollinated and, since individuals can be scattered away from each other with lots of dense foliage in between, some species have evolved complicated systems to ensure they can't be self-pollinated. The native guava or copper laurel (Eupomatia laurina) has just such a system. Its pollinator is a beetle (which would explain why its flower smells mildly awful) but its flower blooms in two stages. On each tree, the female flower parts are exposed first in the early part of the day. Then this part of the flower closes and the male parts (stamens) are extended. This ensures that any one tree can't be self-pollinated. The native guava is a relic, primitive species with its entire family composed of only one genus with three species.

The pepper tree (Tasmannia membranea) gets its name from the taste of its seeds rather than its bland fruit. This tree is from one of the earliest flowering plant families known - Winteraceae - making it a true relic of the rainforest. The pepper tree is more like a large shrub than a tree, only reaching three metres in height. It shares a characteristic with the less developed cycads - it has separate male and female flowers on different plants.

Ducula bicolor, the scientific name of the Torres Strait or pied imperial pigeon means "eater of myristica" or put more commonly, "eater of nutmeg". Myristica is a genus containing only three species in the Wet Tropics, one of which we know as the Queensland nutmeg. The rust coloured, ovoid shaped fruit, 20mm in size is the favourite food of the pied imperial pigeon - hence its scientific name. Queensland nutmeg (Myristica globulosa subsp. muelleri) could be used for the commercial production of the spice nutmeg but a similar species from the Solomons is used instead. (Myristica fragrans from the Moluccas yields the commerical spices nutmeg (seeds) and mace (arils). This 15 metre tree is another example of a primitive flowering plant, and also has separate trees for male and female flowers.