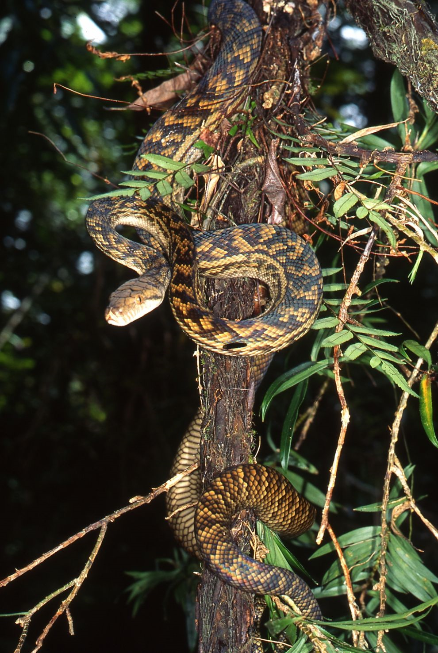 Australia is known for its large number of extremely venomous snakes but we have at least ten python species as well. The largest snake in the country is a very common Wet Tropics celebrity which frequently visits the area's human inhabitants, especially those who keep domestic animals.

The amethystine python (Morelia amethistina) - also known locally as a scrub python - has been confirmed at seven meters long and about 30 kilograms, but anecdotal accounts suggest some larger individuals. The python has a very distinctive tan diamond pattern along its length and is often seen crossing roads in the rainforest at night.

People living on the edge of the bush or people keeping birds often report them in their yards. Pythons feed on warm-blooded animals and have heat-seeking pits in their jaw to locate their heat-emitting prey. Domestic pets such as small dogs, cats, chickens and parrots are frequently an easy target of the scrub python and aviaries and chook pens must be snake proof to protect their residents.

The amethystine python usually has a docile nature. However, it is not advisable to approach or attempt to handle any snake no matter how tame it might seem. A bite from this snake could result in a severe wound that would probably bleed profusely. Additionally, a python's body is almost entirely muscle so a large individual is extraordinarily powerful. Once coiled around your body, the combined strength of several people might be required to remove it.

Mention venomous snakes and the typical response is that you're talking about a dangerous snake - but that is not necessarily so! There are two types of poisonous snakes in Australia. 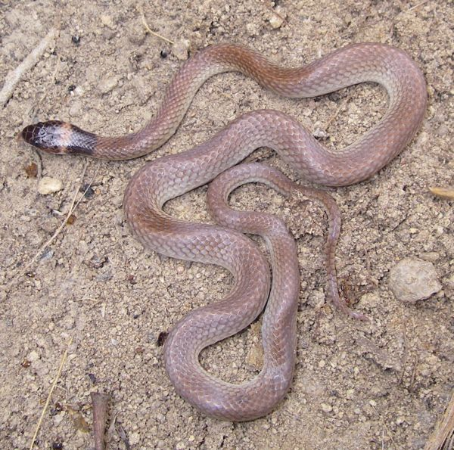 One group is called the elapids and these snakes distribute their venom through their front fangs. A group of Australian snakes that we need not fear but should have a healthy respect for and that is the elapids - the front fanged snakes. Even though this group has the capability to be harmful, the majority are not. Only a few of these have aggressive or easily excitable dispositions. It is a good rule of thumb for any snake you encounter to leave them alone and just admire them from a distance.

Little in size does not necessarily mean little in threat. The small-eyed snake is shiny black above and cream or pinkish below and it's only about 50cm (20 inches) long but it should still be admired from a reasonable distance. The likelihood of the casual visitor seeing one in the forest or heathland is not great however, as this snake is shy and nocturnal. It normally lives under rocks or logs so be observant when climbing over these during night bushwalks. This small-eyed snake (Rhinoplocephalus nigrescens) bears live young - usually four or five and its favourite food is lizards. 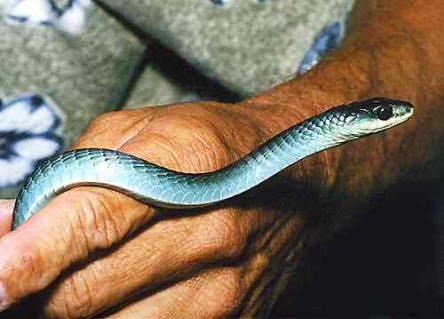 The other group is the colubrids and some of these also have venom glands but the toxin is dispersed through fangs in the back of their mouths. To receive a dose of the colubrid's venom, you'd basically have to stick your finger down its throat!

The brown tree snake (Boiga irregularis) is often seen in and out of the forest at night - it is sometimes called the night tiger. The brown tree snake  is normally about 1.4 metres long and it is not dangerous to us - but birds, small mammals and lizards would not like to meet one.

You can find out more about Wet Tropics snakes by downloading: 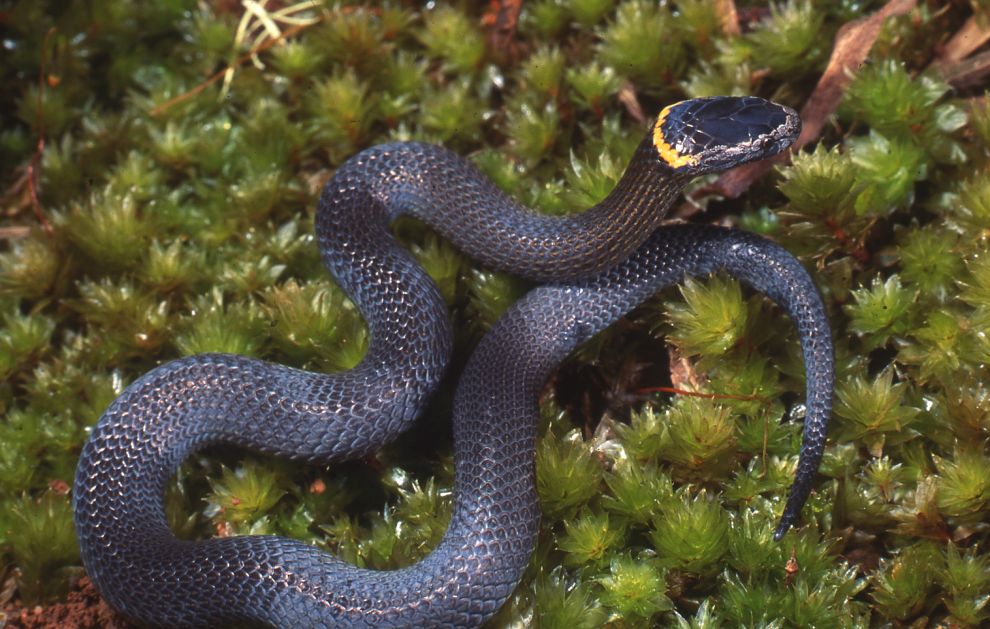