Andrew Maclean, M’Lis Flynn and Campbell Clarke were among the 6000 people from over 170 countries who attended the IUCN World Parks Congress from 12-19 November 2014.

Each of them presented at the congress on behalf of the Authority, discussing major projects and issues regarding management of the Wet Tropics World Heritage Area.

Andrew ran a session on ‘Keeping the Outstanding Exceptional – The Cairns Communique’, which promoted the benefits of the communique for World Heritage managers throughout Australia and recommended it be adapted for use worldwide by the World Heritage Committee.

M’Lis continued her participatory 3D modelling work with Mandingalbay Yidinji Traditional Owners throughout the conference. Each day they continued to paint and label a large three dimensional model of their traditional lands from Yarrabah south along the Malbon Thompson Range. Many hundreds of visitors from across the world showed an interest in the process and wanted to develop similar models in their own communities. On behalf of Mandingalbay Yindinji, Vince Mundraby presented the model to Mr Luvuyo Mandela, the champion of the World Parks Congress, who graciously acknowledged the honour. You can read more about the P3DM project here.

Campbell presented a reporting framework for the Outstanding Universal Value of the Wet Tropics as part of a broader discussion about how best to incorporate Outstanding Universal Value into the nomination and management of World Heritage Areas. He also made a short presentation about Mobilising Landholders – the Authority’s recent rainforest restoration project on the Southern Atherton Tablelands.

Executive Director Andrew Maclean was invited to make a presentation on Australia’s management of the Wet Tropics rainforests at the Asia-Pacific rainforest summit hosted by Australian Minister for the Environment, The Hon Greg Hunt MP in the two days prior to the World Parks Congress.  In a pleasant surprise, an address by the Director General of UNESCO, Irina Bokova at the summit  session on ‘International and Civil Society Perspectives’ singled out the Wet Tropics Management Authority and its associated  legislation under the Wet Tropics Act that recognises the important role Aboriginal people play in the management of natural and cultural heritage. Read the full story here.

The next IUCN World Parks Congress will be held in ten years. 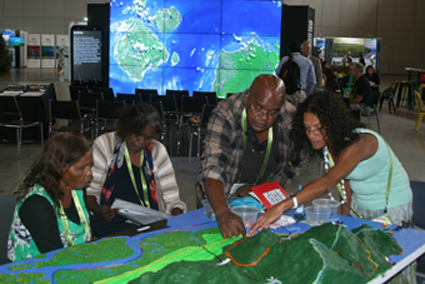